What does Trad mean? What is the full form of Trad?

The full form of Trad is traditional
This slang term is the shortened form of the word “traditional.” It is used to describe a style of clothing, grooming, or anything else that never seems to go out of style and has been long established or someone who operates by a set of longstanding habits.

Origin of Trad
This slang term originated in the 1950s as a shortened abbreviated way to say the word “traditional.” At first, the phrase referred to classic jazz music, but it is has evolved to include anything that is considered classic from music to clothing and other aspects of life.

Other Meanings
This term is said to mean several different things on the internet. One of the more popular meanings is that it is a shortened representation of the word retard meaning a stupid person. Another definition of this term says that it is a rock climbing skill that involves climbing without bolts. Yet another says that the term is an acronym that stands for the phrase “totally rockin’ awesome dude.” There are many others as well, but there are so many it would take too long to list them all here.

Friend 1: Hey, have you given any more thought to your wedding plans? We need to seriously start planning it if we are going to have everything done by next year.
Friend 2: I have given it some thought. I would like it to be anything but trad.
Friend 1: I kind of figured that much already since you don’t tend to like classic styles when we look at dresses.

Translate traditional to other language. 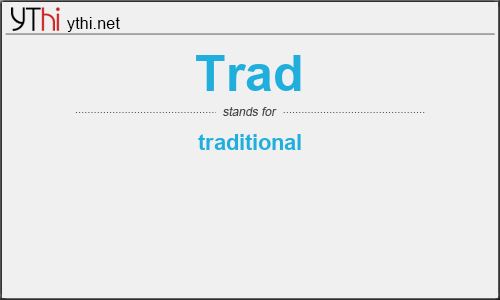